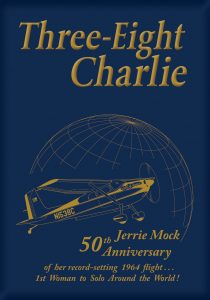 Three-Eight Charlie is the story of Jerrie Mock’s record-setting flight as the first woman to solo around the world in 1964 in a single-engine Cessna 180. It’s an insightful and well written account that includes intrigue and heroism, and discusses the cultures and geography of the world at the time. This book is a great read for aviation enthusiasts as well as young people, and anyone with big dreams.

Three-Eight Charlie
was originally published in 1970, but is out of print and difficult to find. Phoenix Graphix Publishing Services is pleased to make a new, colorful edition available for the 50th anniversary of Jerrie’s flight. This new edition includes maps and weather charts and photos that bring the story to life, and help the reader experience it more fully.
This Anniversary edition is sold out.

A black and white paperback is currently available for $17.95.
Click on the Shop tab to place your order.

The paper back version was on back order but is now in stock. All orders that were held are being fulfilled now. If you placed an order and have not received it, please contact me directly at 740-587-3659.

Check out our Reviews section, or tell us what you think about the book here info@phoenixgraphix.us.

In celebration of the 50th Anniversary on April 17th 2014 we have a new black & white paperback edition of Three-Eight Charlie available now. Only $17.95.

We have been working hard to provide a digital edition of Three-Eight Charlie and that is available NOW. Our Kindle version is available on Amazon.com, visit our link below to get that now. Kindle Edition